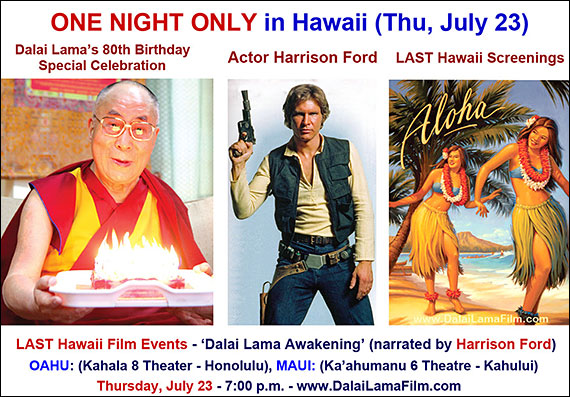 These will be the ONLY screenings of thes ‘Dalai Lama Awakening’ film in Hawaii in 2015, as the film continues to travel across the U.S. and Canada for a 100-city U.S.-Canada Tour.

The film has traveled to dozens of cities across the U.S., Canada and Europe, with many SOLD OUT screenings and an enthusiastic response from audiences.

For more information about the films, please visit: www.DalaiLamaFilm.com

Please LIKE the Facebook page for the film (which includes the latest photos and event info): www.facebook.com/DalaiLamaAwakening

The entire film tour schedule during the 100-city U.S.-Canada tour can be found here: http://dalailamafilm.com/events